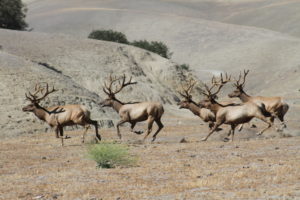 Central Coast Outfitters offers spring turkey hunts in San Luis Obispo and Southern Monterey Counties. We have four private ranches that we hunt, two in San Luis Obispo County and two in Southern Monterey County. The season starts in the last weekend of March and ends the first weekend in May. The Central Coast of California is absolutely beautiful this time of year. These ranches are full of big toms in the spring. There is nothing quite like working a big old tom into range.

Our Fall turkey hunts are conducted on a beautiful ranch in San Benito County. On this hunt you stay right on the ranch in a wonderful lodge where you can see the San Benito River ambling along. This lodge has a huge living room with a fireplace, which is a great place to come in and relax after a day’s hunt. All suites have their own bathrooms; some suites have their own fireplace. In the afternoon and evening you can sit out on the porch and watch the big toms strut their way to the roost and most evenings you will hear the toms gobbling on their way to the roost from this wonderful lodge. This hunt is conducted on one of the most premier hunting properties on the Central Coast of California. 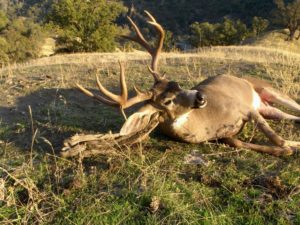 Mendocino County California is the diamond location of all Black Tail Deer Hunts. On this hunt one will see Black Tail Deer that dreams are made of, you will also see Black Bear, Bald Eagles, Golden Eagles, Otters, Salmon and Steelhead swimming up river to spawn. In the evening after the day’s hunt you can sit out on the porch of the cabin relax and listen to the river flowing below. Sometimes you can hear the Salmon and Steelhead beating their way up the river. In the morning it is not uncommon to see bear and deer right from the cabin before you’ve had a chance to have that first cup of coffee. This hunt offers the hunter a chance at a record book black tail on the same hunt. The beauty of the Mendocino Mountains this time of year is absolutely marvelous from spectacular sunsets to the leaves turning color. We have taken bucks that score from 135 SCI to 175 SCI. Tags are very limited for these hunts so you will need to book early and you will also need to purchase your B-Zone tag early. 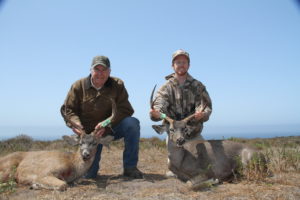 Our deer hunts are conducted in the southern portion of the A-Zone in Santa Barbara County. We are running a 100% success rate on this deer hunt. On this ranch we also conduct hunts for wild boar, s, quail, and dove. Pig hunts are offered year round. Hunting wild boar is a great hunt for a novice or a veteran hunter. All hunts with the exception of deer hunts have a two person minimum. Quail season starts in late October and ends in late January. All hunters are required to use non lead ammunition on this 25,000 acre ranch. 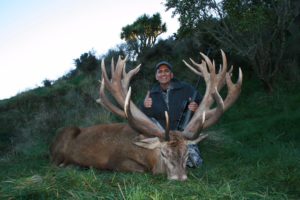 For the big game hunter there is nothing that can stir the heart more than the roar from a big Red Stag. To see one of these majestic and noble animals on the mountain side with his harem of hinds is a sight to behold. Each Stag is unique and magnificent in his own way.

Some of the largest Red Stags taken in the world are coming from New Zealand. You will see, and have the opportunity to study many stags during your hunt. All Stags will be scored using the SCI scoring system. Your guide will estimate the approximate score of each stag while you are hunting. 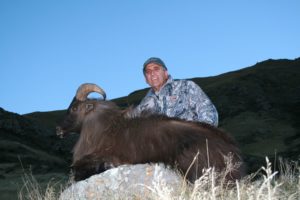 One of the most interesting animals in New Zealand is the mighty Tahr. Tahr are one of the toughest animals that call New Zealand home. Most people think that the only way to successfully pursue Tahr is with the aid of a helicopter; this is simply not true. We offer a world class foot hunt for this beautiful and amazing animal. Our hunt takes place on private land; we can tailor this wonderful hunt to fit anyone’s physical capabilities.

The beauty of the area that we hunt is breathtaking. The views and mountains are truly amazing; you won’t ever forget this hunt. Remember to bring a good camera you will need it. Historically our Tahr average 12.7 inches and are approximately 7 to 8 years of age. 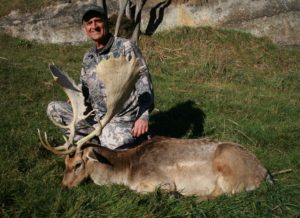 The European Fallow Deer is one of the world’s most beautiful deer. They have large palmated antlers. We have taken bucks with as many as 20 points or more. During the rut (April, May) the bucks become very aggressive fighters. These unique deer come in several color phases ranging from white to coal black. This is a trophy animal you won’t want to pass up while in New Zealand. 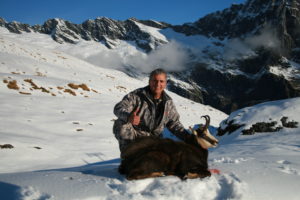 The Alpine Chamois is one of the largest sub species of the 10 sub species in the world, and is found on the South Island. A hunt for the Alpine Chamois is a wonderful experience filled with beautiful scenery and spectacular views. There is an opportunity to hunt Chamois either on foot or by helicopter. The helicopter hunt is absolutely spectacular; you will see some the most beautiful scenery on the face of the earth. You will see snowcapped peaks and ice glaciers grinding their way along. This will be a hunt you never ever forget. 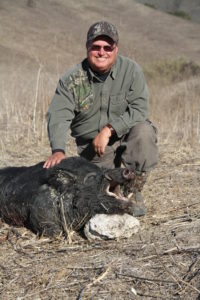 All these animals make great add on hunts while you are on your hunt of a lifetime. 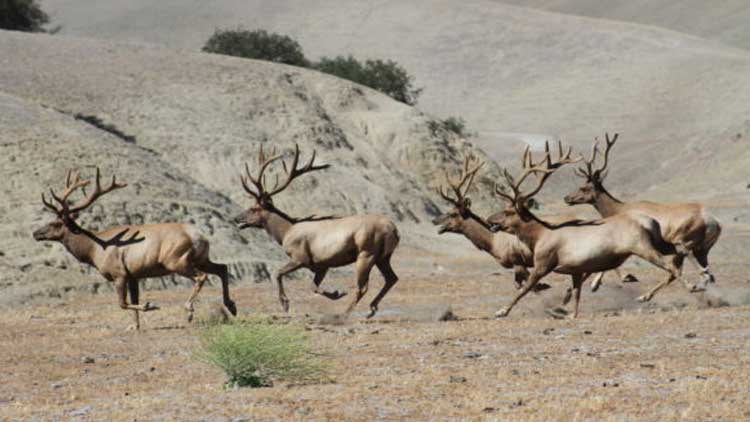 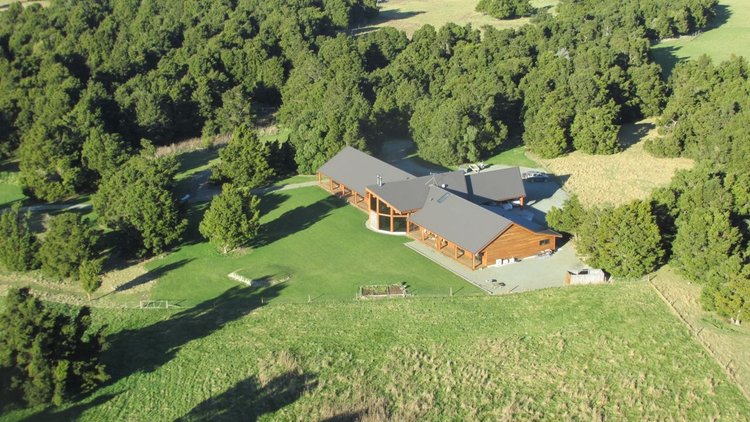 Welcome (Kiaora!) to New Zealand. You will be staying in the eleven thousand square foot Woodbury Safari Lodge. The lodge has six luxury suites with private baths and climate control. All hunts are based from this beautiful lodge. It’s a fantastic place to come back to relax and share stories from the day’s activities. New Zealand is hard to beat for its sheer beauty and friendly people. In addition to hunting, sightseeing is something you will want to take advantage of while you are in this wonderful country. Take a day to see Mt. Cook, the highest mountain in New Zealand and have lunch at Lake Tekapo. Then travel on to Milford Sound, it is said that this could be the eighth wonder of the world because of its beautiful landscape. No matter what you choose to do while you are in New Zealand you can’t go wrong. We look forward to making your time with us some thing you’ll never forget.